I often browse old Japanese console and computer magazines. I’m mainly searching for old Hanafuda Koi-Koi video games, but sometimes I stumble across something else that is interesting in a totally different way.

Recently, whilst browsing an old issue of POPCOM over at the wonderful Internet Archive, I found a period map of the Akihabara district — famous for its multitude of stores selling electronics, video games and other otaku goods.

I shared the map on Twitter, where it was well received, so I decided to go into this a bit more deeply here.

This is the earliest map so far, discovered in a scan of Technopolis magazine on the internet archive dated November 1982. Given its illustrated nature the map is somewhat stylised but the landmarks are easily recognised. 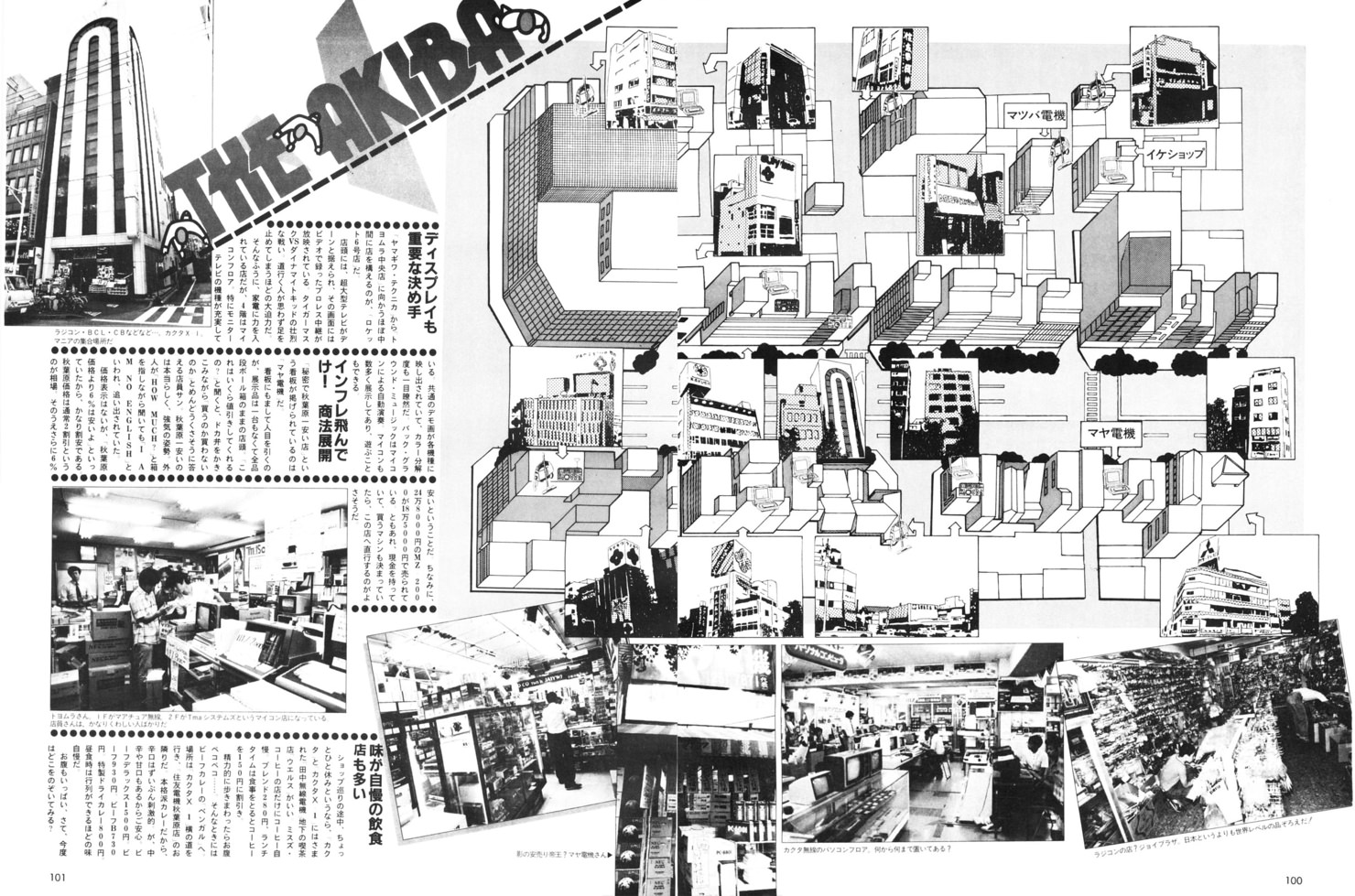 The version of the POPCOM 1983-05 map shown below is a 12.5 megapixel high-resolution version that is much easier to read, made by stitching together the two highest resolution scans of these pages. Download akiba-1983 below.

Note: in the magazine the map is followed by 4 pages of listings that refer to the map using the A/J–1/10 key along its edge just in case you want to look some things up. 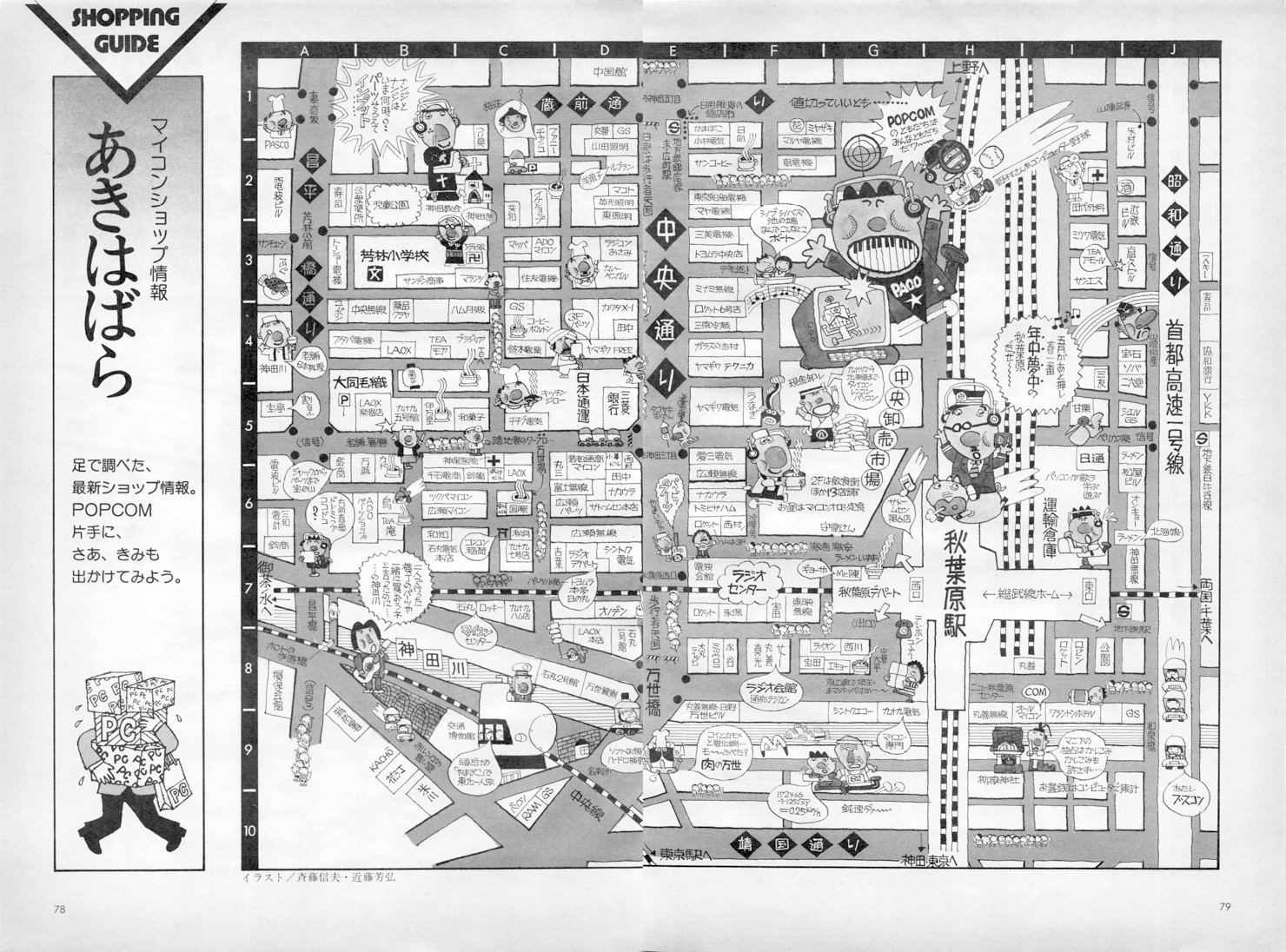 A slightly later hand-drawn map is featured in LOGiN 1983 No. 11 in an Shibuya-focused edition of its ShopNews column. Whilst searching my ever-growing archive of Japanese Macintosh Media I found an archived copy of the Akiba organisation website on the Nikkei MAC CD Vol. 9, from 1997-02-15.

「ボーナスは大切にネ！! 秋葉原を上手に歩こう」 (“Take care of your bonus! Walk well in Akihabara.”) is a copy of the Akiba website dated June 1996, some four months before the earliest version in the Wayback Machine. A lot of the files that comprise the website are dated 1993, which I assume is when the site was first created. This sort of hand-built site really brings back some fond memories of the websites I built in the mid-90s: image maps, optimised GIFs, no content management system. Ah! The good old days.

The 250+ maps it contains are hyperlinked in a multitude of ways and the website navigates quite well considering its age. I’ve had most luck browsing using Netscape Navigator 3.01 (ja). The whole thing is quite comprehensive: maps are split into geographical zones and are detailed to a building floor level. Alternative lists by category and product type are also included. There are a total of 221 stores, of which 68 are member stores and receive more in-depth coverage with their own page and photos. 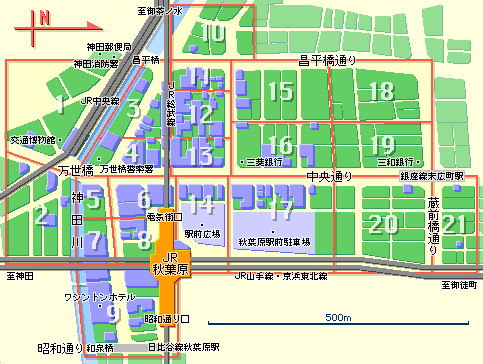 This new discovery reminded me of another vintage map of Akihabara that I had seen recently, only this time it was digital and available for platforms that were popular at the time: Palm OS (as a native app), Macintosh and Windows (as a FileMaker Pro interactive database).

All versions of these interactive maps can be downloaded at the following links:

I think of this map as the DogCow Map due to the domain it was hosted on at the time, but its official name is Kosapi’s Akiba Map 「こさぴーの秋葉マップ」named after the group of fans that created and curated it by documenting their trips to Akihabara.

The HTML version was typical of websites at the time: way too many HTML files and images with image-maps presented as a frameset that makes specific pages pretty much impossible to bookmark. Ah, the heady days of Y2K web development!

Download akibaweb2kr1 below, or from the following archive.org link. 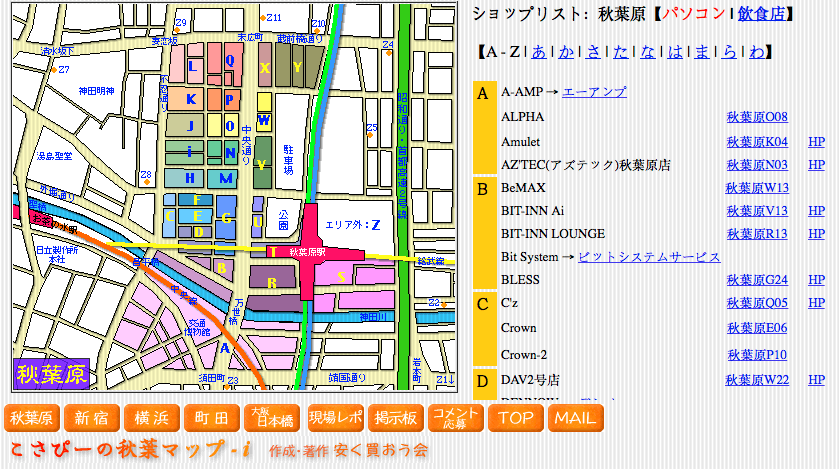 The digital download versions of Kosapi’s Akiba Map were updated until around 2001, when I guess easy access to the internet made offline maps like this somewhat less useful.

But the FileMaker Pro database is interesting, as it can still be loaded and viewed on modern macOS. When I loaded it into FileMaker Pro 11 — a vintage Trial version from 2010 that just about manages to run on macOS 10.13.6 — the database was converted to a more modern format that I’ve attached to this post (download akibamapti.fp7 below). You can click around hyperlinks to navigate and view business details in a very CD-ROM kind of way.

Anyway, I did a bunch of image grabbing and assembling to put together this large 27.8 megapixel version of the map (download akiba-2001 below): 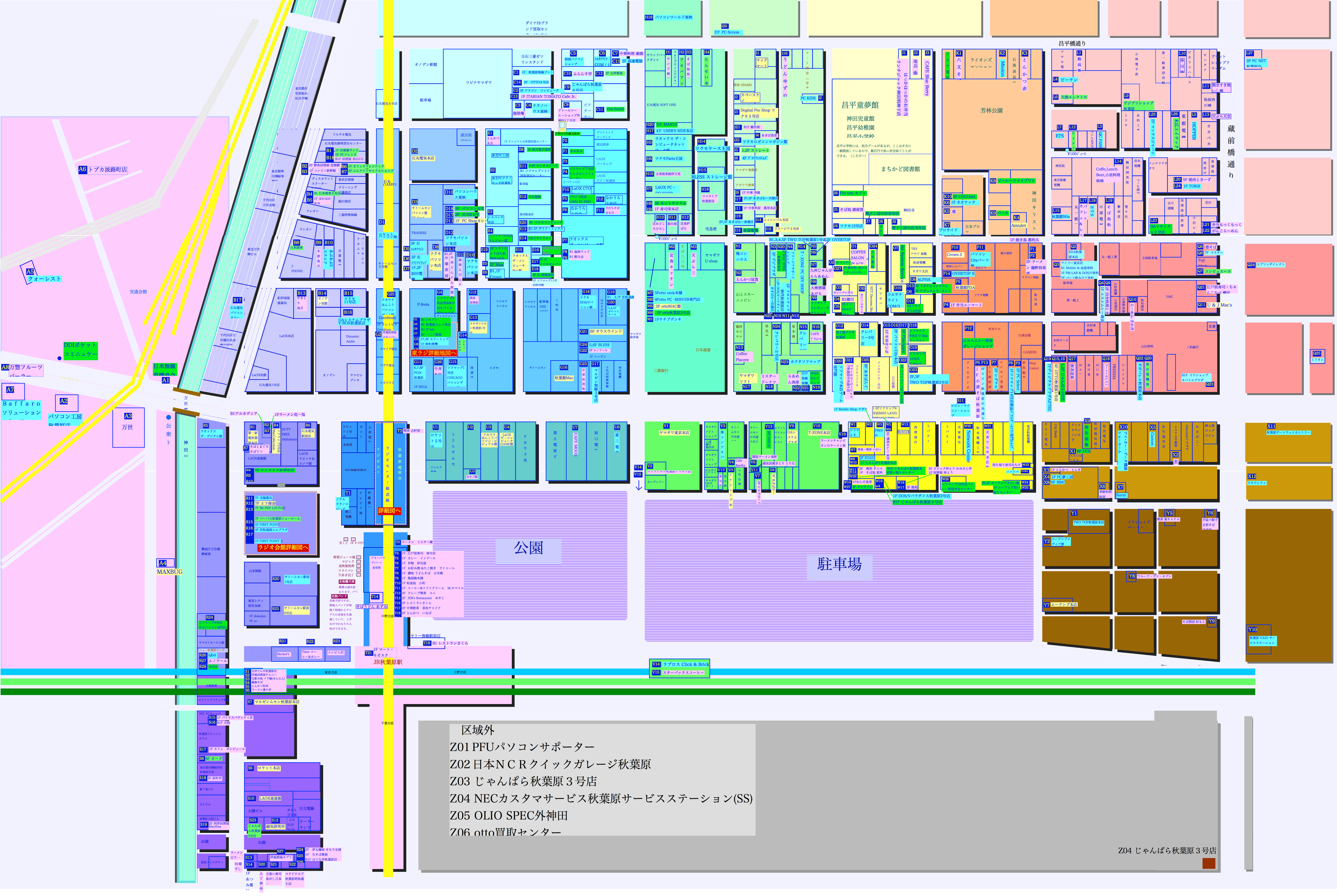 For 10 years, an interactive online map was published by Impress Corporation under the title of AKIBA PC Hotline! It’s similar to Kosapi’s Akiba Map and arguably better made. 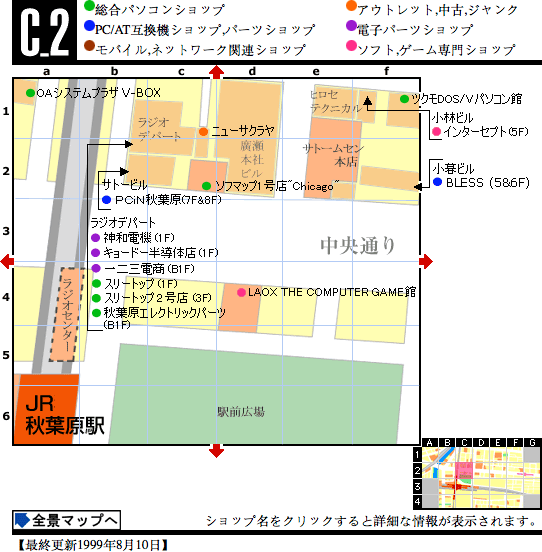 I’ll be sure to add to this post if any other interesting vintage maps of Akihbara come to light. Especially for the period between 1983 and 1996.