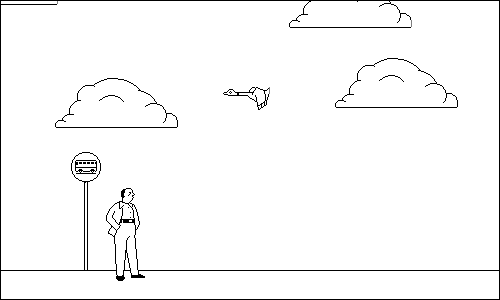 Fly Guy takes me back—way back. Whilst 2002 seems so long ago, it comes as no surprise that it is so long ago. Screens were smaller, computers were slower, web browsers were much less capable and had to be helped along by plugins; so long ago that there was no iPhone! It was also the year I met the girl who would become my wife. Good times.

To give the timeframe a bit of context, the consoles of the day were the GameCube, PlayStation 2 and Xbox. How strange it must have seemed when Fly Guy appeared in web browsers using the once popular Macromedia Flash plugin to provide animation, sound and keyboard control in the small browser windows of the time.

Purposefully eschewing 2002-era graphics, and opting for monochrome pixel artwork reminiscent of the original Apple Macintosh, turns Fly Guy into something timeless. Trevor Van Meter also injects a good dose of humour on top of his excellent animations. A chilled, looping melody, and various spot sound effects round out the package. This is one stylish and psychedelic game.

But Fly Guy is more of a multimedia piece, or an interactive work of art, than a game. There is a goal, of course, and various things happen along the way (I won’t spoil it by telling you what they are), but there is no high score and no fire button. Everything that appears in the game serves a purpose, and it’s the exploration and discovery that brings a smile to your face in the few minutes you should take out of your day to play through this forgotten gem.

Let’s hope it’s not too long before we enjoy a new trip in Fly Guy 2?

July 2016: some 14 years after it was originally launched Fly Guy has been re-released on mobile! Links below.

Previous Post
Review: MaBoShi
Next Post
How to push an update to the App Store without building a new binary