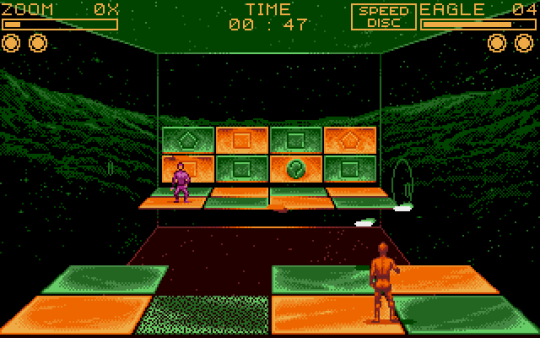 A future sports game that aims high but struggles to hit the mark.

In the era of the 16-bit home computers, there was a trend to take concepts that had made an impression at the arcade and create a version of them for home release that neatly sidestepped any licence that may have otherwise been required. And so Disc, whilst not being a straight copy, is obviously inspired by the arcade game Discs of Tron which was itself based on a sequence in the 1982 cult sci-fi movie Tron.

Disc presents a futuristic sport where competitors throw discs of light at each other in gladiator-style, with the goal of being the last man standing. This can be achieved in two ways: by knocking your opponent out into the abyss by destroying the tiles that make up the platform they stand on, or by hitting your opponent with the disc enough times so their energy is reduced to zero.

In reality, this plays out like a somewhat awkward cross between Breakout and Shufflepuck Café.

The gameplay is enhanced in a number of ways: ownership of the disc can be transferred by catching it, or avoided by deflecting it with your shield; power-ups can increase the speed or damage capability of your disc; extra discs can be awarded, allowing for multiple discs to be in play at once; and tiles that need to be hit multiple times before they disappear. Increasingly difficult opponents also introduce new tricks that require different play styles to be learnt and used to beat them. All this is set against a timer which, if it reaches zero, awards victory to the player with the most tiles remaining in their area.

The original Discs of Tron game featured analogue aiming using a spinner, and 8-way movement of the player using the joystick. The programmers at Loriciel came up with an ingenious way of mapping these controls to an 8-way joystick with single fire button: without the fire button pressed the joystick controls the movement of the player, with the fire button pressed the joystick controls throwing of the disc or use of the shield. It takes a little getting used to, and even then you’ll likely make some timing mistakes in the heat of the moment and do something unintentionally. But it worked well enough.

The graphics are something else though. They effuse that particular French quality I am so fond of, with a firm dose of science fiction that sits somewhere between the helmet-wearing ostrich riders of Joust and the inside-the-mainframe look of Tron.

The only issue I have with the game is that it can get repetitive. The difficulty curve is too long and this can lead to boredom setting in. But for a few short rounds, the game is great to look at and fun to play.

Historical note: the Atari ST version was first to be released, and later ported well to Amiga and PC, and to the Amstrad CPC with surprisingly little loss of fidelity.