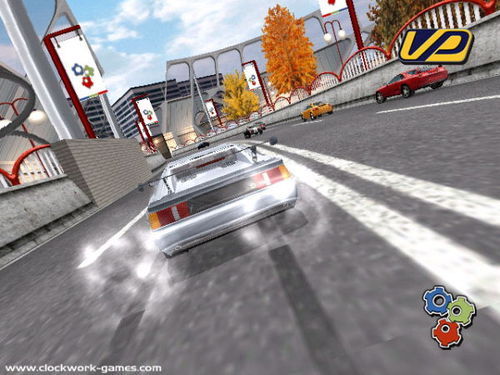 I’ve recently come back to this game in an attempt to complete it 100%, picking up my 10 year old save game. It’s a great game, though the sensitivity of the controls can be unforgiving at times. But it’s definitely worth persevering with. Think of it like a modern day Stunt Car Racer and you’ll be fine – laying off the accelerator is just as important as keeping the pedal to the metal.

Straddling the narrow line between flat-out arcade racer and flat-tyre simulation, Vanishing Point offered a wealth of cars, locations and driving modes that still stand up today. Time Trial, Single Races and Tournaments as well as a novel Stunt Mode in which you had to throw the cars around various non-race challenges with pinpoint precision. The recent Trials HD on the 360 brings back a lot of memories of Stunt Mode for me, except Vanishing Point had more cones, balloons and chequered flags.

Multi-player modes were Head-to-Head split-screen for two, and Knock-out, League and Winner-Stays-On for up to eight player sessions. The game also took advantage of the Dreamcast’s online function and allowed you to send Challenge Times back and forth with your mates.

Sitting somewhere between Gran Turismo and Ridge Racer the range of cars available was broad but also quite unique. As well as fast cars like the Shelby Cobra and Dodgy Viper, the game also featured alternative choices like the world famous Mini, VW camper van and even some American muscle cars. You had to start with just two default cars and unlock the rest through your own driving skill. The game wasn’t afraid to do things its own way.

All of this was dressed up in high resolution 60fps graphics that made it’s contemporaries look positively old school. It’s a crying shame Clockwork Games didn’t survive long enough to make a sequel. Perhaps it exists in the same alternate dimension where the Dreamcast is still selling millions? Yes, I’d like to go there.

The thorn in the game’s side was it’s overly sensitive default controls, which caused many gamers to not even give the game a chance. But those that did would find a truly complete and supremely rewarding driving game.

Update: I finally completed the game in May 2015. Woop!