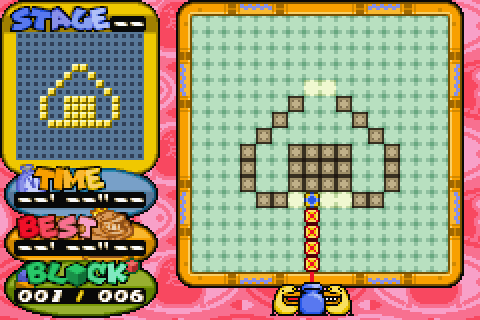 I’ve been playing this on-and-off for years and still haven’t finished all the puzzles. It’s one of those games that I love so much that I sort of don’t want to finish it. Possibly the greatest puzzler of all time – disregarding Tetris, of course.

Each stage sees you having to complete the image by placing and removing blocks on the board. The puzzles are set up so that there is no simple solution; a position may be blocked by other immovable areas, so you have to improvise a solution by constantly constructing and deconstructing scaffolding in order to get a piece into the correct position. As well as controls to add or remove blocks from the board, you can also rotate the board to enable you to approach the problem from any side.

As well as having bags of gameplay the game also features some completely bonkers characters, over-the-top stage clear screens and the craziest of cutscenes. It’s a shame to say it but these are the sorts of things you only seem to get in Japanese games, as the rest of the world seems too scared to make a game with a sense of humour.

Game developer Compile went bust a short time after releasing the game, though some of their staff went on to work at Eighting, working on Kuru Kuru Kururin amongst other games. A version was made for Japanese mobile phones, and there were unofficial versions made for MSX, PC, and PopCap even out out a version under the name Pixelus but that was discontinued – I hope for reasons of IP infringement.

The game is quite expensive to buy these days if you can even find it outside of Japan. But worry not because as of 2nd December 2009, thanks to Nintendo’s DSiWare download service, Japanese DSi owners can play a modern reworking of the game under the name of Spinning Logic (ぐるぐるロジック gurugururojikku) whilst in the USA as of October 18th 2010 it’s available as Snapdots.