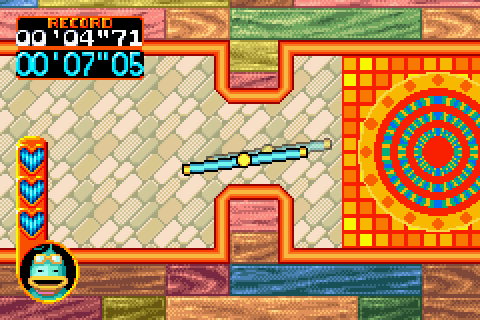 Kuru Kuru Kururin sums up what I think is so great about the sort of games Nintendo publish. It’s an unorthodox action/puzzle/maze game made by a third party best known for their scrolling shoot ’em ups. No other company would have the balls to release a game like this, never mind as part of a console launch line-up.

The launch of a console is always an interesting event, the launch line-up of games can be make or break for the system. So instead of rushing out and buying the latest iteration of long running series (Mario, Tony Hawk’s, F-Zero, Castlevania) I was intrigued to find a quintessential Japanese game in the European GBA launch lineup. It had my name written all over it.

In Kuru Kuru Kururin, you’re a rabbit, piloting a helicopter rotor blade, in search of a mother’s lost children. What this means in terms of gameplay is that you have to guide a constantly spinning stick around a series of mazes, avoiding the walls, to get to the exit. The concept becomes fun as you have to judge the position of your spinning stick when manoeuvring around corners, through gaps and past moving obstacles and enemies. Getting to the goal is a nail biting experience, and there’s nothing quite like the feeling of getting a perfect run through the level. Well, except perhaps getting a perfect run whilst breaking your personal best for that level.

What’s brilliant about the game is that you can play it in so many different ways:

Whilst Nintendo were brave enough to release the game in Europe, it must not have sold very well as the two sequels (Kururin Paradise for GBA and Kururin Squash! for GameCube) were only released in Japan. I was such a fan of the first game that I bought the other two regardless.

I even took the two GBA versions of the game on holiday one year to Corfu, just to give me something to do whilst sunbathing. My girlfriend might argue against me when I say was possibly one of the greatest gaming decisions I’ve ever made. I sat for a few hours every day on the beach for the whole week we were away and managed to ace both games - I think I’m a bit gaming OCD like that. Even so, completing all levels perfectly and breaking all records remains one of my greatest gaming achievements to date. Though I think I drew the line at the secret, super-difficult levels that were unlocked for doing so. Perhaps I can do them on my next holiday?