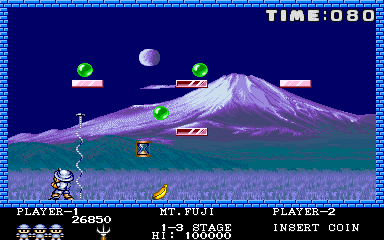 I like to think that this game taught me as much about world geography as school did, but that’s probably a slight exaggeration. Still, it remains to this day one of my all time favourite games.

You’re a little dude in a white safari suit on an around-the-world quest to destroy bouncing balloons at various well known locations. A second player can join in wearing a pink safari suit. Starting at the magnificent Mt Fuji in Japan and ending at Easter Island in the Pacific Ocean, you must fire your grappling gun up into the air to make contact with a balloon, which will then split into two smaller balloons. Hitting the smallest sized balloons will make them disappear. Hitting the same size balloons one after the other will multiple how many points they’re worth.

There are a number of power-ups to help and hinder: different weapons, freeze time, slow time, invincibility and dynamite. There are also hidden bonus points in the form of fruit and animals. The levels are expertly designed using different types of platforms, ladders and so on. You might think that not much can be done with some bouncing balls, some platforms and the odd ladder but you’d be wrong. It’s the sign of a great game where a simple gameplay mechanic can be used in so many different ways.

Some people say that the game is far too hard, but I think it has a perfect balance of risk/reward gameplay and I’m always left with the desire to have just one more go. The sign of a great arcade game.

As a final note, Pang: Magical Michael was recently released for Nintendo DS – hoorah! I think it’s the best version of the game to date and definitely worth the wait.