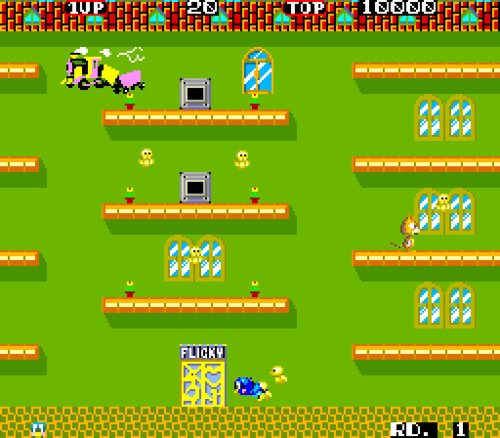 Flicky is one of those games that’s been released so many times on so many compilations that you probably already own it without even realising. It’s also a typical 1980s arcade game—simple to pick up, difficult to master, and a lot of fun along the way.

I’m a bit too young to have encountered Flicky in the arcades. I actually stumbled across the game by accident—it came in a double game cartridge alongside Gunstar Heroes on the Mega Drive. Quite why those two games were put together I have no idea. Designed by Yoji Ishii—later part of Sonic Team—Flicky can be considered spiritual precursor to the Sonic the Hedgehog series.

The aim of the game is, as a blue sparrow named Flicky, to collect a bunch of lost chicks from around each stage and lead them to the exit. It may sound easy but there are a lot of things that can get in your way. Enemies take the form of various animals that emerge from air vents—one touch and you’ll lose a life, as well as your trail of chicks. Chicks will also stop following you if an enemy crosses their path, at which point you’ll need to pick them up again. You’re not totally defenceless though, as you can collect plant pots and things from around each stage. These things are autmatically thrown as you jump, so judicious timing of jumps can be key. The stages in the game are single screens that scroll horizontally to keep Flicky centred. Each stage is loosely decorated to look like an apartment with windows, shelves, pot plants, home-wares, and of course the exit door.

There are more nice touches—some chicks are blind, and if set loose from your trail will wander around aimlessly making them much more difficult to pick up. You can spot those chicks easily as they wear Stevie Wonder style sunglasses. Every few stages a bonus round appears, in which chicks are flung into the air leaving you to catch them in a net. Flicky’s inertia makes collecting all of them pretty tricky, but doing so will gain a lot more points. More points not only means a higher score, but also the chance of extra lives. Doing really well will result in a series of pixel girls appearing in the odd looking window on the level as your end of level bonus is added to your score. Quite a task, if you’re looking for a challenge.

What I love so much about Flicky is that it’s such a pure gaming experience. It’s possible to plan a route around the stage in away that you can pick up all chicks in one go, avoiding/killing any enemies en route, before depositing them at the exit. All in less than 20 seconds in order to get maximum bonus points. The satisfaction from such a perfect run is immense. However, messing up will result in the stage becoming very difficult indeed, as you attempt to pick up the chicks who are, of course, now moving around.

I love the way the game does so much with so little. A true classic.

Over the years Flicky has been re-released as part of various Sega Mega Drive/Genesis compilations and is available, in one form or another, for pretty much every recent platform, including GameCube, PC, PSP, PS2, PS3, Xbox, Xbox 360 and even some mobile phones. And that’s just the official emulated versions. MAME would be the best place to play the original arcade version. So there’s no shortage of places to get your Flicky on.

Since writing this review I’ve been lucky enough to become owner of an original Flicky arcade cabinet, which is now the star of its own blog: http://flicky1984.tumblr.com