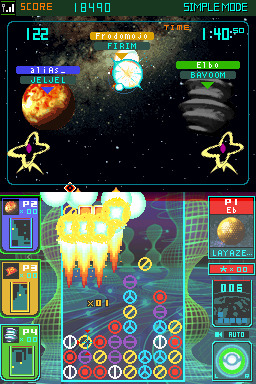 It’s easy to forget that when dual screen feature of the DS was announced some corners of the gaming world thought Nintendo had lost the plot. Whilst a reasonable number of launch games used the lower, touch-sensitive screen in novel ways, it was important that games continued to do so as the console matured.

Meteos was the DS’s second big-name puzzle game, after the excellent Polarium from Mitchell Corp. The scenario is fairly simple: meteors of various colours rain down towards the bottom of the screen and pile up into columns as they land on top of one another, whilst the player moves any block up and down within it’s own column. When three or more meteors of the same colour are arranged either vertically or horizontally they ignite and rocket up towards the top screen, carrying with them any other meteors that get in the way. Skilful play chaining together multiple ignitions means you can lift lots more blocks at once and make things easier for yourself. Push as many meteors as you can of the bottom screen, and watch out for the bottom screen filling up or it will be game over.

The constant barrage of blocks raining down the screen and the continuous chain of reactions blasting blocks back up the screen can result in absolute pandemonium. Coupled with a riot of sound effects, some players find the whole thing sensory overload. Indeed, the multi-tasking required by the player means that playing the game is both a mental and physical exercise that is never short of tension. It’s the initial confusion that comes with playing such a manic game that I think prevented the game reaching Tetris-style fever.

Nevertheless Meteos is accommodating to new players, featuring a multitude of “planets” each with subtle variations. For example reduced gravity will affecting the pace of the gameplay. Throw into the mix a finely balanced difficulty curve, a bunch of single and multi-player game modes and you’ve got a pretty much perfectly realised game.

The game is commonly credited to Tetsuya Mizuguchi, given that it hails from the Q Entertainment stable, but it was in fact designed by Masahiro Sakurai who had previously been the creative force behind both the Kirby and the Super Smash Bros. series of games for Nintendo whilst at HAL Laboratory. Nintendo fans are hoping he brings the midas touch to his next project - Kid Icarus: Uprising for the 3DS.

A pseudo-sequel to the game was released under the name Meteos: Disney Magic which introduced branded graphics, the ability to move blocks sideways and the a change in screen orientation allowing for a taller play area. All changes are considered to have been for the worse, so if you’re looking to buy the game go for the original version.