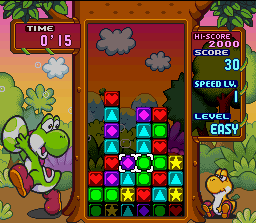 When does a Tetris game have nothing to do with Tetris? When you’re trying to market a fantastic but niche Japanese game to the rest of the world, of course.

Tetris Attack has a strange heritage, starting out life as a Japan-only release Panel de Pon. It was successful in Japan and prompted Nintendo to wonder how well it might do with a worldwide release. This resulted in them doing a quick rebrand of the game, adding in a bunch of characters from their SNES masterpiece Yoshi’s Island in an effort to make it more appealing to gamers outside of Japan. It was a great marketing decision and the game was a success. As mentioned earlier on the core gameplay has nothing in common with Tetris, but it does feature blocks so I guess that was a bit of artistic licence on Nintendo’s part. Lucky that they had the handheld Tetris rights at this particular time and were able to persuade Tetris Company founder Henk Rogers to let them use the name in this way. Perhaps proof that a great game concept won’t sell well if it doesn’t have a recognisable brand name attached?

Blocks continually rise up from the bottom of the screen, the player controlling a two block wide cursor that swaps the pair of blocks horizontally when the action button is pressed. Making a row or column of three or more blocks of the same colour will clear them from the play field, potentially creating chains of combos as new blocks falling to take their place. If the blocks reach the top of the screen it’s game over. The game offers a variety of both single and multi-player modes. In these versus modes, combos will send large garbage blocks to your opponent, which must be eliminated by clearing a piece that is touching it, turning it into a bunch of normal blocks.

One thing the game does have in common with Tetris is that it’s fiendishly addictive. The simple gameplay mechanic and depth of the rules of play mean that it sinks its teeth into you fast and hard and refuses to let go. In that respect, the game is up there as one of the best puzzle games of all time.

Playing the game today is easy, as there have been so many versions released over the years. The concept received a second rebranding a few years later in the form of the Puzzle League series which has appeared on every subsequent Nintendo console. The DS version even adds touch control to the game making it even more accessible.