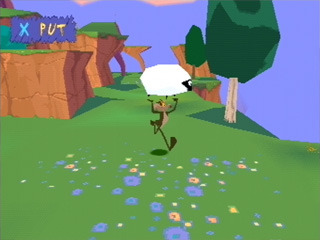 In a sea of badly realised licenced games French company Infogrames made a daring move to buck the trend, creating this cartoon stealth ‘em up set in the Looney Tunes world. The result is a fabulous game as imaginative as the source material it’s based on.

You play a Ralph Wolf – a Looney Tunes character the double of Wile E. Coyote from their Road Runner series of cartoons. The story goes that you’re starring in a game show hosted by Daffy Duck in which you have to steal sheep from under the nose of Sam Sheepdog. Using ACME products such as rockets, dynamite and giant elastic bands ordered from mailboxes conveniently places around each level - as well as a variety of items that make up the scenery - you have to figure out how to get to a sheep without being seen. After that, it’s usually but not always an easier task to get it to the level exit. It’s a brilliantly inventive mix of stealth, puzzle, platform and adventure genres that really brings a breath of fresh air to all of those genres.

Whilst there are only 15 levels - and it’s quite possible to run through each of them in a few minutes - the pace of the game encourages a more sedate pace. With it’s electro-jazz music you’re left largely to your own devices as you survey the lay of the land, sneak around, collect items and figure out how to approach the problem of sheep stealing with the tools you have at hand.

The game is slickly presented with short tutorials to introduce every new gameplay mechanic and has all the hallmarks of a Looney Tunes cartoon: a cast of well known characters all of whom have their proper voices, a luscious cell-shaded 3D realisation of the cartoon world, and the famously comical over-the-top deaths.

Even today - almost 10 years after it was released – it’s rare to get a game this simple, fun and challenging. In fact, there’s little else on the original PlayStation that holds up so well after so many years. Plus, it’s as cheap as chips on eBay and you can even get a graphically improved version that will run on Windows that might be more convenient to obtain and play these days.

I’d love to see a follow-up to this game, or alternatively another game that treads the same ground as I’m hungry for more.