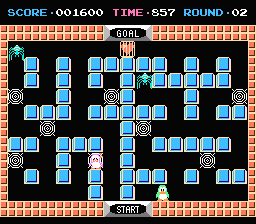 A tale of enduring love, spiders and spray cans. This charming little maze game is interesting for one major reason - you control both characters simultaneously.

It’s not as difficult as it sounds, though, so don’t worry. Both characters walk up and down the screen as directed, but when you attempt sideways movement the first character does as directed and the other does the opposite - making for some interesting brain work. The characters start on opposite sides the screen and you have to figure out how to navigate the maze so that the characters arrive at the goal at the same time. Judicious use of dead-ends and the maze walls can prevent movement of one or the other characters and allow you to move them one at a time, albeit only in a limited way. Things get more difficult with the addition of spider enemies that need to be avoided, and also spider’s webs that will trap either character if walked into. At this point you’ll have to get to them and then use a spray can to destroy the web and free them.

As with most games of this age, the graphics are functional at best but they do have a certain charm of their own. The music is Eric Satie’s “Je te veux” (I want you) - a sentimental, slow waltz that lends itself wonderfully to the NES chip music stylings. But the game is really all about the puzzles provided by the maze layouts of which there many - the first three are always the same but after that the rest of the mazes are presented in a random order.

Hudson Soft first released Binary Land in 1983 for the MSX and a bunch of other Japan-only home computers and this version of the game featured a boy and a girl. The game was later released in 1985 for the NES/Famicom with the two main characters replaced by penguins, which whilst being reminiscent of Pengo adds a lot of charm to the game. Even more so when you look at the cover. The MSX version saw release in Europe by Kuma Computers Ltd in 1984, but the NES version never made it out of Japan.

More recently a poor java mobile phone version was made and the game was released as Hudson Best Collection Vol. 4 on Game Boy Advance, which contains a bunch of NES games running under emulation. Whilst emulation is the most convenient way to play the original game these days, there have also been a couple of fan remakes which can be played on your desktop computer.