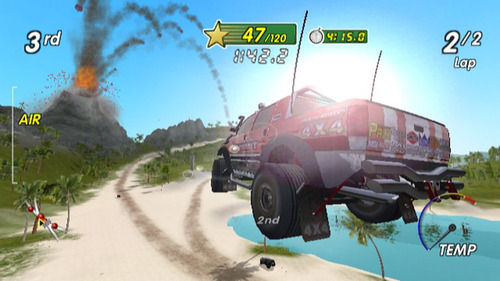 Creating a sequel to a game is a tricky thing. It’s often difficult to retain the essence of the original game, meaning a lot of sequels keep things safe and don’t stray too far from the concept along the way. This usually leads to an average game, which is why it was such a shock to find that this one goes up to 11.

One of the most well remembered NES games is Excite Bike - an arcade-style dirt bike game in which you jump over a series of hills whilst going fast and avoiding obstacles. The game received a sequel on the Nintendo 64 which took concept into the third dimension, adding a few game new modes along the way, but otherwise remaining quite faithful to the original.

After that, not much was heard from the series until a surprise announcement of Excite Truck as a launch title for the Nintendo Wii. It traded in bikes for trucks and multiplied pretty much everything else in the game by a huge factor. Courses are no longer set in a stadium but rather around vast landscapes based on countries from around the world that lend themselves to the standard themes for driving game environments: Mexico for deserts and canyons, Finland for snow and ice, Fiji for beaches and volcanoes, not to mention Canada, Scotland and China. The core gameplay is the same, in that you must race around a course getting big air and beating your opponents, making good use of your turbo which is prone to overheating. Also thrown into the mix is the ability to crash into your opponents, or indeed the scenery. Crashing into the scenery sees you having to pound a button repeatedly to restart your car, a great nod of the head to gamers who do this anyway during cut scenes and delays in many other games. On the other hand, crashing into opponents leads to a new mechanic - receiving stars - which can also be gained by performing mid-air spins and driving dangerously. Winning a race is not simply a matter of coming first - you also have to receive a certain number of stars, which adds a nice extra layer of subtlety to play.

Just like it’s predecessors, racing is still very much an arcade experience. There’s no hint of simulation anywhere in the game and that’s no bad thing. The game starts off easy enough and then gets more and more of an adrenalin rush as it continues through various difficulty levels and challenges. There’s a great sense of speed throughout, too. The game remains finely balanced at all times and you’re never left feeling hard done by and are always hungry for one more go. Racing hard and fast and getting ridiculously big air really is one of life’s greatest gaming pleasures.

The game offered local multi-player only, something that was addressed in it’s madcap sequel Excitebots: Trick Racing which adds a whole range of crazy mini-games and power-ups to proceedings whilst trading in the trucks for transforming robot animal cars. Yes. Whilst not as charming as Excite Truck, Excitebots is every bit as good a game. It may even be better if you like to play your racing games online. Sadly, Excite Bots was only ever released in the USA so you’ll have to look for it on import.

For those that don’t own a Wii, Smash Cars on the PlayStation 3 is a pretty decent copy of Excite Truck but has you racing radio controlled cars around oversized locations. It’s not quite as good a game as either Excite Truck or Excite Bots, and it brings little of it’s own to the table, but it plays well enough.