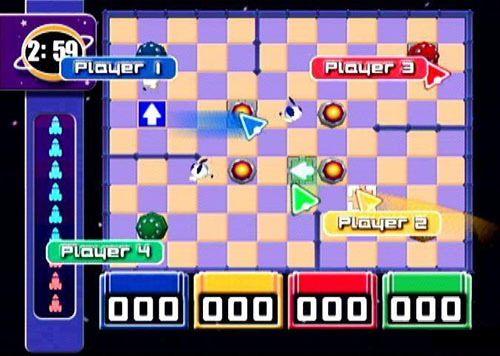 The Dreamcast was the first truly online home video game console, and brought with it the first wave of fantastic online multi-player games that could be played on your TV. ChuChu Rocket! was one of the best, an outstanding action puzzler with a glorious multi-player mode.

The aim of the game is to guide mice (“ChuChus”) around the screen into one or more goals (Rockets) whilst avoiding any cats (“KapuKapus”) that are roaming about. Both the mice and cats move in predictable ways - they always turn right when reaching a wall, they follow corners and they turn around when they encounter a dead end. The player places up to three arrows on the play field, which will direct anything that passes over them - both mice and cats. Arrows cannot be laid on top of other arrow or obstacles, and disappear over time and the oldest is removed if the player lays a fourth arrow. Special mice frequently appear, golden mice being worth many times more than regular mice and pink mice randomly changing gameplay in one of a number of ways. Such a simple premise quickly results in a maddening procession of mice and cats and all manner of confusion as players try to outwit each the positioning of arrows.

Single player mode saw you play against the computer or in puzzle mode where you have to figure out the solution to puzzles by placing your arrows in the correct locations to get the mice to the exit, which was an excellent part of the game in itself. Local multi-player is an absolute riot and has to be seen to be believed - there simply aren’t many other games that are this much fun played with a few friends. Online multi-player was a great backup option to have as you’d never be short of people to play against. It’s something we’re used to these days with things like Xbox Live and as we have all grown up and got on with our own lives it’s often the preferred way to experience multi-player gaming.

With the demise of the Dreamcast the game slowly faded away, briefly reentering the public eye a year later with a release on the Game Boy Advance. This handheld version matched the Dreamcast original feature for feature, with the exception of online play. However it did have slightly simplified graphics and an extra 2,5000 user-generated puzzles taken from the Dreamcast version’s online hub. There was a fan remake for the Atari ST which was an accurate but unofficial version of the game.

Recently a version of the game was released on the App Store, but with features being spread across an iPhone version and an iPad version and it not feat as much content as the older GameBoy Advance version. It’s great to see such an original game get a new lease of life, but sad that it’s still missing important features from the original, showing just how far ahead of it’s time the Dreamcast was. Hopefully the iOS versions of the game will gain multi-player support in the future and finally give us the experience that was so enthralling those 10 years ago.

This review is dedicated to my good friend Morgan, without whom I’d have never bought a Dreamcast. He will always be Mr Sega to me.