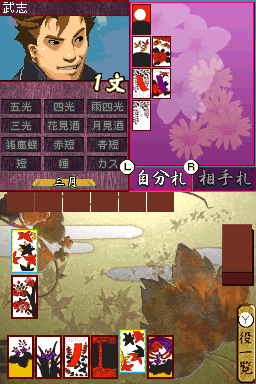 Nintendo started out in the entertainment business by manufacturing Hanafuda, or flower cards. There are a number of games that are commonly played with these cards the most popular of which is Koi-Koi, a game of surprising depth and one of my vices.

A Hanafuda deck consists of 48 cards split into twelve suits - one for each month. Each is designated a flower, and each suit has four cards. Typically, there are two “normal” cards, one poetry ribbon card, and a final special card. Familiarising yourself with the Hanafuda deck is the first obstacle to playing a game with them.

The object of Koi-Koi is to form special card combinations (“yaku”) from cards accumulated in a point pile. Players can gain cards in their point piles by matching cards in their hands, or cards drawn from the draw pile, with cards on the table. Once a yaku has been made, a player can stop to cash in points, or keep going (“koi-koi”) to form additional yaku for more points. Different yaku are worth different numbers of points, roughly matching how difficult it is to collect that particular combination of cards. Memorising the dozen or so valid yaku is the second obstacle to the game.

I first played Koi-Koi as part of the 42 All-Time Classics compilation of parlour games that Nintendo released for the DS. The game really intrigued me and I played it a lot to try to memorise the yaku. By then, though, the game had well and truly sunk it’s teeth into me. I search high and low for alternative versions of the game, amassing quite a collection in the process. I have Hanafuda/Koi-Koi games on pretty much every platform from older systems such as the WonderSwan, PlayStation and Dreamcast to more recent systems such as the iPhone, Wii and Nintendo DS. The main benefit of playing the game electronically is that you don’t have to keep score, but I find it fascinating that there can be such a range of quality and implementation when the rules of the game are so fixed. Some versions lay the cards on the table in a very confusing way, others over-complicate the controls so that it’s tricky to manipulate the cards or even see whose turn it is next or what your possible choices are. Then there are the games that dress up the game with licenced characters or graphics, such as Youkai Hana Asobi, in an attempt to add a story around the game.

So, after much searching I was overjoyed to find DS Spirits Hanafuda, which for me is pretty much the perfect Hanafuda game. It looks good, controls well, lays out the cards logically and has a multitude of game modes including a Mission mode in which you have to play in a variety of ways such as winning without conceding a point, by collecting certain yaku or within a certain number of rounds. This mode in particular shows the great depth to the game and I’m still to finish the final challenge. The only bad thing about this version of the game is that it features only Japanese text. Dealing with Japanese is the third obstacle with the game, as the traditional Japanese nature of the game means that there’s very little Western interest and very few versions released that are English-friendly.

But obstacles are there to be overcome. If you’ve not got a Nintendo DS, then the next best Koi-Koi game is on the iPhone. This version by Hidetoshi Hayakawa plays a great game of cards, supports wireless multi-player and also features a progressive mode versus the computer. Whilst not as polished or complete as DS Spirits Hanafuda it features full English interface and instructions so it’s as probably the best starting point. Perhaps Koi-Koi will capture your heart as much as it has mine? Give the game a go and find out.