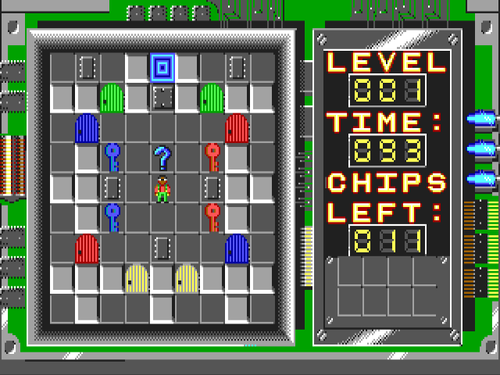 Sokoban for the 20th century.

Sokoban was a Japanese puzzle game created in 1981 by Hiroyuki Imabayashi in which the player pushes boxes around a warehouse onto a number of designated goal locations. It’s a game whose depth and complexity rivals chess, and which has been used as a testbed for Artificial Intelligence applications and other science research. It’s up there with Tetris as one of the purest gameplay concepts ever created. Indeed, you might wonder how such a solid concept could be improved upon. Many had tried and either failed or ended up with a game that didn’t vary from Sokoban in any meaningful way. I expect Chuck Sommerville was pretty pleased with himself as he refined the Sokoban concept and ended up with Chip’s Challenge for the Atari Lynx. Even more amazing is that the programming for the final version was completed in a mater of weeks.

Chip’s Challenge took the core Sokoban concept of pushing things around and injected it with a good dose of humour and a bunch of extra gameplay elements, such as conveyor belts, keys, enemies, transporters, destroyable tiles, switches, power ups and more. And of course computer chips that need to be picked up to complete a level. These extra features meant that levels could vary greatly in difficulty and also in play style - some would be puzzles and others would focus more on action. Level passwords allowed the player to resume their game before battery backup game saving was the norm. The game became fiendishly difficult as you progressed through just under 150 extremely well designed levels.

The game was subsequently released on multiple home computer platforms, culminating in a version produced by Microsoft for Windows 95. This well-known version has different graphics and some errors in the gameplay logic, meaning it isn’t really the best one to play. I recommend playing the DOS version (shown above), Commodore Amiga, Atari ST or Atari Lynx version through an emulator.

Chuck Sommerville apparently completed work on Chip’s Challenge 2, but it has never been published due to the fact he didn’t retain the copyright on the game name. But you can see a video of what might have been on YouTube. He has also gone on to reuse a lot of the same ideas in Chuck’s Challenge, a pseudo sequel to the original game which keeps the majority of the gameplay elements but changes the scenario to one with much less personality. For me the master stroke of Chip’s Challenge is the more interesting scenario - kids growing up with the Atari Lynx would have much more affinity with a nerd trying to get into a computer club than with a guy pushing boxes around a warehouse with no real aim.