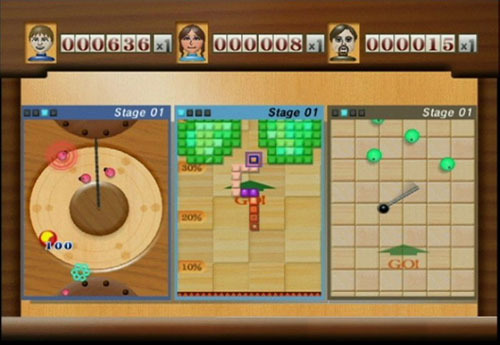 Three games for the price of one in this innovative WiiWare title. Six if you count the fact that you can download a version of the game over Wi-Fi to your Nintendo DS to play on the move.

WiiWare is the downloadable game service on Nintendo’s Wii home console. It lets you download smaller sized and lower priced games direct to your console, and offers a distinctly different range of games than you can pick up through more traditional retail outlets. The channel showcases game concepts that may not have been profitable to release elsewhere. It’s astonishing that without WiiWare, MaBoShi may never have seen the light of day. Each of its three game concepts are so unconventional and slight that I think most gamers might not give them a second glance, even at this very affordable price.

MaBoShi takes advantage of few of the Wii’s features but still delivers a solid and innovative experience. It allows players to use their Miis as avatars in the game, send replays to other players via WiiConnect24, and also has the previously mentioned Wi-Fi download to Nintendo DS. But there is no sign of motion control. In fact, whilst the wii remote is used as a pointer for the game menu, MaBoShi is firmly a one button game. Or perhaps that be three one button games, as there are actually three main game modes: Circle, Bar and Square. Each mode is played differently, but with the same objective - to score one million points. In the Wii version there are three game panels on screen, allowing simultaneous multi-player.

With multiple players the game adds an extra feature into the mix, known simply as the Effect System. Destroying an enemy will cause a bubble to appear. This bubble moves across the screen and over other game panels where it can affect other games in progress. This means that players managing their own separate games may be influenced by these effects eminating from other game panels, and players may therefore choose whether they wish to help or hinder their fellow players. It’s not often you get to choose whether to play cooperatively or competitively, and I really like this aspect of the gameplay.

Circle mode - my personal favourite - finds you in control of a constantly rotating circle, able to switch the direction in which it is spinning by pressing the A button. By controlling the speed and momentum of the circle, you must guide it around the screen. You can use the variety of dynamic obstacles that appear on screen as a means to achieving the precise movement required to collide with the enemies and collect bonus multipliers. The aim of each round is to collide with all enemies as they appear onscreen, before they move off the game area. It is game over as soon as one enemy leaves the play field. The depth of control in this game mode is simply astonishing, and infrequent taps of the A button allow almost analog control of speed and momentum. Special mention must also go to the level design in this game, as it is balanced to perfection. In fact, if you’re good enough to score a million you will most likely do so near the end of all available 40 levels.

Bar mode sees you manoeuvring a rotating bar through a vertically scrolling level. The bar rotates around a core, which only moves using the momentum created by the bar and only when the A button is held. The bar can be used to defeat enemies and smash blocks, but if the core touches an enemy or a block the game ends. There are also pinballs, powerups and much more to contend with. I find this game the most difficult of the three.

Square mode sees the player controlling a single block that leaves a trail of fire behind. This trail of fire can burn obstacles, and can even set other parts of the trail alight. You must navigate around the screen, at your own pace, setting fire to all the obstacles with the help of the occasional bomb, whilst keeping an eye out for bonus multipliers. The screen scrolls when the player moves, and if an obstacle or part of the trail of fire hits the bottom of the screen, the game ends.

Created by Japanese pinball experts Mindware Corp, MaBoShi is a triumph of game design and deserves your attention. If you fancy a challenge I can heartily recommend trying to reach one million points in one or all of the game modes (I’ve only managed to do it myself in circle mode on the DS download version) - the game has a lot to offer if you’re willing to give it a try. Nintendo seem to be of the same mind, as they recently released an updated and expanded version of the Square game for their DSiWare download service under the name of Flametail (USA) also known as Trailblaze: Puzzle Incinerator (EU) and Moyasu Puzzle: Flametail (JPN).