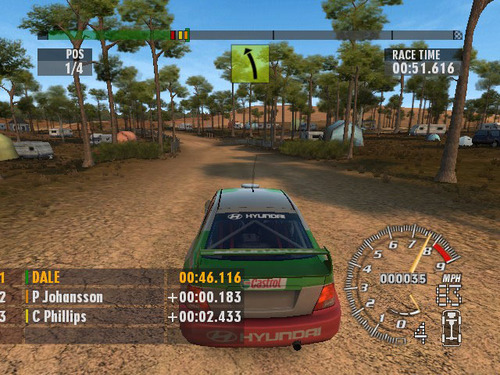 I missed out on the Xbox during it’s ascent to online gaming console of choice, picking one up only recently when a friend of mine gave me his old one to use as a media centre. I took the opportunity to catch up on the best bits of the Xbox back catalogue and was pleased to find some absolute gems. Including a few titles released under Microsoft’s now defunct XSN Sports label: Links 2004 and RalliSport Challenge 2. I love a good driving game so I settled down for the ride.

In order for a rally game to work in needs to recreate everything that makes the sport what it is. As well as fast cars and precise handling, it needs to simulate the environment, terrain, atmosphere, speed and exhilaration. That’s a lot of factors and it’s understandable why so many rally games end up so average - they undoubtedly get something wrong along the way. It could be dodgy graphics, unconvincing weather effects, unbelievable scenery or – worse – handling that feels unrealistic. Or maybe the game just doesn’t feel like you’re going very fast. RalliSport Challenge 2 makes no such mistakes. Forget Colin McRae/DiRT, Sega Rally, V-Rally, WRC - this is the only rally game you’ll ever need.

It features a great range of cars, course, locations and race types – which can be unlocked through a novel tree structure where you choose which branch to race next. This means you have the luxury of skipping a race you may be finding difficult so you can still progress. The graphics are great given the limitations of the Xbox - cars and scenery are very detailed and everything looks lifelike. Environmental effects - time of day and weather in particular – are brilliant and really add to the feeling of being there. Track design is inspired, with even the longest of courses remaining distinct over their length and not looking like they’re put together from repeated elements or building blocks. Cars show damage in real time so you’ll see windows smash and body parts fly off when you inevitably collide with trees or walls, which brings me to my only gripe about the game. In the years that have passed since the game was released we’ve been spoilt with destructible scenery and all sort of fancy effects, but in RalliSport Challenge 2 everything is pretty much static. You can crash into a house or a fence and everything – apart from your own car – remains untouched. Still, in a game where you’re making every effort to stay pointing the right way it’s not much of a problem - in fact it’s often a bit of a help. Vibration and sound varies according to the type of road you’re driving on, again adding to the immersion. In terms of difficulty racing can be a struggle at times but it’s always fun. There’s also some DLC available - 4 new cars, 2 new careers and some new car livery.

Everything screams along at breakneck speed and the game engine doesn’t miss a beat at 60fps, a goal of visual fidelity that seems to have been forgotten about in the race for photorealism on modern machines like the Xbox 360 and PlayStation 3. You’ll want to hook your Xbox up using a component connection so that you get progressive scan. RGB SCART just isn’t up to the job of displaying detailed images so quickly - the interlaced output will mean you’ll struggle to see the finer details of the fast moving track somewhere around the half way point in the game.

It’s sad to think that we may never get a third game in the series - Microsoft simply have no idea what hot property they’re sitting on. Sadly it’s in their hands as developer DICE – of Mirror’s Edge fame – have no control over the situation. To add insult to injury the game doesn’t run on the Xbox 360 so you’re going to have to fire up your old original Xbox to play it, and Microsoft recently discontinued Xbox Live support for their original machine and so you’re no longer able to play through official means. It is possible using a third party service such as XLink Kai and the DLC is available for download if you google it.

Some feelings are hard to describe in words and that’s true here - there’s never been a game that felt so right and so complete.