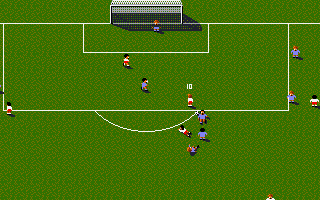 When people mention football (soccer) games these days there are probably mean one of two games: FIFA and Pro Evolution Soccer. These games have evolved year-on-year, from when they were originally poles apart to today where they are very much the same sort of game: photorealistic players, recognisable stadiums, team kits, tournaments and commentary from your most loved (or hated) TV sports commentator. They really feel like you’re at a football match. But I often ask myself why they feel like you’re watching a football match rather than playing a football match?

Back in the days when pixel graphics ruled the world - well my world at least - the computer football game was an entirely different beast. The power of the machines at the time imposed limits on what was possible in terms of graphics and anything else superfluous to the gameplay. Football was rendered at a much more abstract level and the rest was left wide open ready to be filled in by your imagination.

In this story it all started with Microprose Soccer - created for Microprose by a couple of Essex boys: Chris Yates and Jon Hare, who later went in to form Sensible Software. It literally flipped football games on their head - displaying the action from a top down viewpoint which allowed for easy control of both player and ball, and also let you influence the path of the ball after a kick using aftertouch. From humble beginnings come great things, as they say, and that was definitely true in this instance.

The story goes that in the middle of developing their “god simulator” Mega-lo-mania, the guys at Sensible Software started dressing up the tiny characters in football kits for fun. Reflecting on their addiction to Anco’s Kick Off 2 at the time, they realised that they had the basis for a new football game of their own: Sensible Soccer - or Sensi as it is affectionately known.

What set Sensi apart from its competitors was that you could see so much more of the pitch at once, allowing for an unparalleled level of forward planning. Control of players and ball was more accurate than ever and meant that it really felt like you were on the pitch playing as part of a team. Although the graphics may seem purely functional they possessed an ability to show remarkable likeness for the players they were representing, regardless of the fact they were only composed of hair colour, skin colour and shirt number it was completely obvious who each player was.

Subsequent revisions of the game made small, incremental improvements including the addition of red and yellow cards and an on-screen referee, as well as improved goalkeeper behaviour and other tweaks. International teams were added along with the World Cup Tournament in a version that also made it onto most consoles at the time, but it remained the same game. A year later came Sensible World of Soccer, which proved to be the ultimate version of the game. It added further refinements to the core gameplay and a comprehensive manager mode giving the game so much more depth. It also featured an amazing amount of player data - all of the players in all of the teams from all of the professional leagues in the world at that time were included - over 1,500 teams and 27,000 players in total. Add to that all national and international competitions for all club and national teams around the world and you have an most perfect representation of football.

But you know what? All that data doesn’t really matter - all you need is a couple of joysticks, a second player and a few minutes to enjoy one of the finest videogame experiences every made. In fact, in 2007 the game was included in a list of theten most important video games of all time. The fact it plays as well today as it did all those years ago is testament to it’s quality. It remains a truly beautiful game.