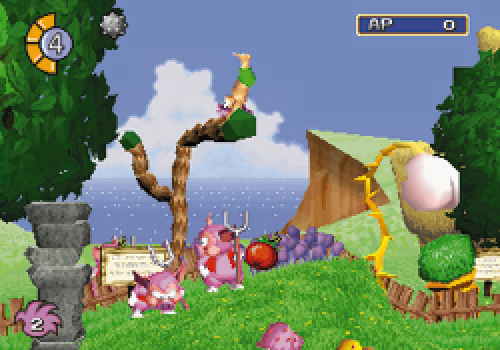 Sony’s PlayStation brought gaming kicking and screaming into the third dimension. Before the introduction of such a powerful console we’d only seen small glimpses of 3D gaming. The SNES had Mode 7 which allowed for the pseudo-3D effects seen in games such as Pilotwings and Super Mario Kart whilst the Super FX chip allowed slightly more convincing 3D worlds like those in Star Fox and Stunt Race FX. But the PlayStation took things to another dimension - allowing fully textured 3D worlds. But where did that leave traditional 2D concepts?

Whoopee Camp had some ideas. They took the platform game and stretched it into something that sits somewhere between 2D and 3D - sort of 2.5D. Action takes place on a 2D plane and the characters are 2D sprites, but the level is rendered in 3D. This gives everything the benefit of depth and perspective but keeps gameplay recognisable, simple and straightforward. As well as the platforming aspect, gameplay also borrowed elements from adventure games such as Coktel Vision’s Gobliiins or LucasArts’ The Secret of Monkey Island where you have to collect and use items in specific ways in order to progress. It even borrows some RPG elements in that there are multiple, overlapping events or tasks to be completed - only a fraction of which are essential for progression of the story – for which you’re rewarded with adventure points. I guess the most accurate description of Tomba! would be a platform adventure game, but that would be to simple a definition.

You can see from the graphics that the game has a unique visual style - full of bold, neon colours more reminiscent of the late-80s rather than the late-90s. You might think the cartoon aesthetic would cover up game meant for kids, but beneath the bright veneer you’ll find a very challenging game that will take you far longer to complete than many more modern ones. Tomba! has a great sense of humour and a somewhat bizarre story but it nevertheless oozes charm and character.

The game received a sequel that moved things on even further - the characters as well as the levels were fully 3D - whilst keeping the core gameplay largely the same. Tomba! creator Tokuro Fujiwara - best known for creating Ghosts ‘n Goblins and producing the Mega Man series - now works at Platinum Games whose recent Vanquish garnered rave reviews. Perhaps they’ll revisit one of gaming’s most misunderstood icons for a third time? A new adventure of the pink-haired little oik would be perfectly suited to modern download services such as DSiWare, WiiWare, XBLA or PSN. Here’s hoping.