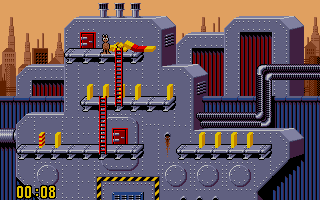 This game was a real time sink for me during my formative years, with its simple rules hiding a fiendishly difficult set of puzzles that chewed through the hours as if they were minutes. It has to be said, however, that the Quavers crisps licence attached to the game was a very odd marketing move.

Each stage in the game consists of a number of platforms - interconnected by ladders - on which there are a series of dominoes. Each type of domino has a different pattern which dictates how it will react when toppled over. The dominoes must be arranged, one at a time, in the correct sequence so that when all dominoes topple in one chain reaction. At this point the exit will open and you can go on to the next stage. The first set of stages are a well-paced introduction to the different types of dominoes.

Various problems present themselves as soon as you start playing - you can only carry one domino at a time, and there is limited space to swap dominoes around. Platforms and even the dominoes themselves can be destroyed. If a domino blocks the exit then you’ll not be able to get out. Your character, G.I. Ant, can also die if he falls too far or is crushed by a falling domino. So it’s a lot more complicated than a simple game of dominoes.

Things are kept interesting by the number of different types of dominoes lending themselves to a variety of puzzles involving some real lateral thinking and planning ahead. Stages are set throughout nine different themed worlds all of which have their own unique graphical style and background music. Almost as an afterthought, a packet of Quavers is awarded to the player upon completing each world, tying things in loosely to the licence. Upon finishing an individual stage a token is awarded, which can be used as an undo function to save time that would be spent laying out the dominoes again. Completing all 100 stages in one session would be a ridiculous challenge, so the game uses a password system allowing you to easily resume from any stage.

Pushover is the perfect example of a one hit wonder. It was a great, original idea but it’s difficulty meant that you’d end up throwing your joystick at the wall because you’d had enough if you weren’t banging on the publisher’s door asking for more. The satisfaction gained from figuring out a puzzle that you’d been struggling with for some time was as addictive as any game.

The game was well received and a sequel - One Step Beyond - was released a year later which featured an entirely new game mechanic. Whilst it was a good game in it’s own right it can’t be held in as high regard as the original.

Whilst you can still play the original game on handful of platforms it was released on, there’s an excellent, modern and authentic remake by Ishisoft that is more enjoyable to play these days.