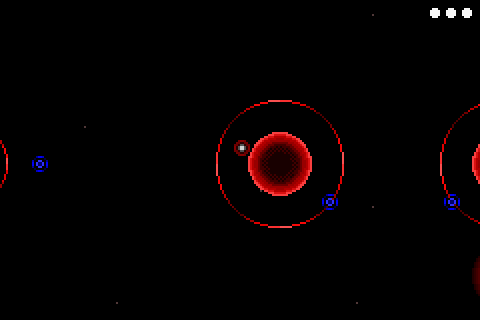 Drifting through space without a care in the universe.

During the final days of the Game Boy Advance a series of games were released by Nintendo in their home territory of Japan under the bit Generations label. A set of seven games featuring basic but stylish graphics and somewhat experimental gameplay.

My favourite of the bunch was Orbital, the objective of which is to control a white star which can grow larger by absorbing other stars. Similarly sized stars are coloured blue, smaller stars are grey and larger stars are red. Collecting blue or grey stars forms the basis of progression in the game, though there are some subtleties to gameplay as it is possible to gain satellites by approaching smaller stars at an angle that will cause them to orbit you - orbit range is shown by a ring around the star. Red stars and asteroids must be avoided at all costs, adding a subtle but necessary level of danger to proceedings. Once your star has grown big enough a final star will begin to glow orange and capturing it in your orbit will clear the stage.

The method of control is really interesting - two buttons are used to either attract or repel your star from the nearest object. This may sound limiting but it allows for an almost analog level of precision from a distinctly digital method of control. Limited lives and other non-collectible obstacles round off the game perfectly. Imagine Katamari Damacy pared down to the essential elements and you’ll be on your way to understanding the vibe.

The beauty of any game built around such a simple set of rules is in the level design, and Orbital is no exception. The difficulty curve - how the levels increase in complexity - is just right, meaning you’ll never feel cheated. New methods of play will need to be discovered if you are to stand any chance of being able to manoeuvre your star with the precision demanded in some of the later levels. Playing the game is a very relaxing experience, and you may find yourself floating around losing hours in the process. It’s as much of a zone game as Tempest 2000, F-Zero or the Wipeout series but more of a thinking mans game than a twitch experience. Though there’s still opportunity for it to sink it’s claws in deep enough to have you screaming at the TV - trying to beat your previous best for any level and numerous minor objectives reward repeated play. In other words: this game has real depth.

The game was later given a re-release on WiiWare under the name of Orbient. Graphics and sound were given extra definition for the big screen and there were a few minor additions to the gameplay, meaning that it’s well worth playing even if you’ve played the original. Both versions of the game are a triumph, showing that beauty and simplicity in gameplay can lead to an engrossing game with a fantastic atmosphere.