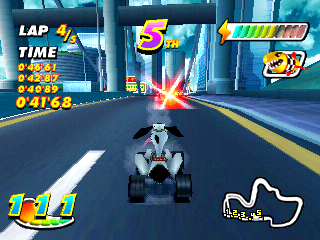 Nintendo seem reluctant to release more than one Mario Kart per console, so fans of the game will often seek out a new challenge by playing one of its many clones. It’s often a futile exercise as it makes painfully clear how far ahead of the competition Nintendo are.

That said, there have been a handful of games that manage to capture enough of the ever-elusive Nintendo magic to deliver an enjoyable and challenging racing game: Rare’s Diddy King Racing was the first contender of note, followed closely by Crash Team Racing. In fact, it was the later that caused Speed Freaks to fly under the radar of most PlayStation gamers - it was delayed by Sony Computer Entertainment to make way for Crash Team Racing at retail. I suppose it’s one thing to try to take sales away from Mario Kart on a competing platform but another to cannibalise sales of your own games on your own platform. The game was given a later release in North America under the name of Speed Punks.

The game has some really nice handling, with some subtle additions to the staple kart racer mechanics including an interesting turbo system. It has a nice enough range of power-ups and weapons that offer something new compared to Mario Kart at the expense of being quite as balanced. There are shortcuts on every track, as you might expect, which are essential when trying to beat some of the more difficult levels or challenges the game has to offer. As well as the usual tournament and time trial modes the game also offers split screen multi-player and a range of bonus characters and modes that are unlocked by playing through the game. Whilst the difficulty level is a little high you have three retry attempts that can be used to restart particular races and recover from any catastrophic errors. Compared to Vanishing Point - another of my favourite racers - this really is a most welcome feature.

A distinctly British sense of humour pervades the whole game, especially obvious in the naming of two bonus characters - Cosworth and Beamer. If Mario had grown up in Essex he’d fit perfectly into this game, and that’s a compliment. The graphics look really great and have a fantastic cartoon feel to them, character design is interesting and unusual, and track design has more going on than the standard scenarios you seem to get in kart racers like this. As with other games of this vintage, the computer AI is prone to stretching the laws physics somewhat, most noticeable in severe rubber-banding and predictable routing. However, despite these minor issues, it remains a fun and rewarding game and one well worth seeking out.