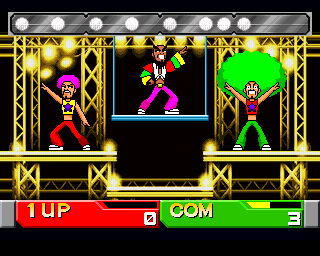 Bishi Bashi Special is a set of games originally found on a pair of Konami arcade machines, the PlayStation version of which allowed up to 8 players using two multi-taps and featured 85 completely mental minigames. This was all years before Wario Ware, Inc., Wii Party or any other mini-game compilations came along.

The games featured such things as body builders on pogo sticks jumping for a piece of meat (“Meat Catcher”), a dance-off to get the biggest afro (“Perm Mania”), a bride throwing wedding cake down the aisle (“Hyper Pie”), juggling cavemen eating different colored balls (“Uncle Bean”), and others with names like “Uncle Launcher”, “Robo Docking” and “Touch Tone Mania”. The games used control schemes that will be familiar to many a game player - for example button bashing like Track and Field, pattern repetition like Simon, and rhythm action button pressing in time with the music. Digitiser, a video game fanzine written by Paul Rose provided by Channel 4 as part of their Teletext service had this to say about Bishi Bashi Special “utterly, utterly dreadful–but… probably one of the best games I’ve ever had the pleasure of playing.” That sums things up better than I ever could.

I used to play Bishi Bashi Special whilst I was lived in my first house share - the perfect place for it really. Having that many people all laughing manically at what was happening on screen was a fantastic experience. Interestingly, the few people I’ve spoken to about the game all have such fond memories but nobody could actually remember too many details so the video linked to below brought them all flooding back. In fact, I’d forgotten that a multi-player game could be so much fun until the exact same atmosphere appeared when I was recently at a friend’s house playing Wii Party, which takes what was done so well in Bishi Bashi Special and dresses it up in that special way only Nintendo seem to be able to do.

So if you’re not consumed by Wii Party and it’s horse racing mode, or sick to death of Wario Ware, Inc., and you’re hungry for more social multi-player gaming, then it might be time to revisit Bishi Bashi Special. It can currently be picked up for £3.49 on the PlayStation Store. That works out at less than 5p a game, making it quite possibly the bargain of the century.