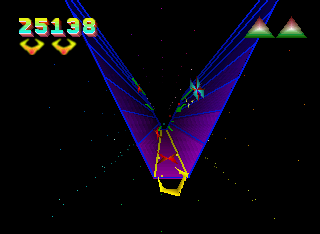 As far as “zone” games go, there are none finer than Jeff Minter’s remake of arcade classic Tempest. It built on the solid foundation of the original and added all manner of power-ups and tripped-out graphics.

There’s no doubting that the original Tempest arcade game is as much of a classic today as it was in 1980, the concept apparently appearing to it’s creator Dave Theurer in a dream. So it’s no mean feat that one man could bring the game kicking and screaming into the 90s in the form of Tempest 2000 or T2K. Released on the Atari Jaguar it was pretty much the only game worth owning on the machine, but was not enough to prevent the machine performing poorly at retail.

T2K modifies the gameplay of the original Tempest by adding in bonus levels, collectible power-ups, more sophisticated enemy types, and wildly varying level (“web”) designs. The game contains a total of 100 webs, with new frame colors and variations every 15 levels. Your progress is saved every couple of levels, and the game allows you to restart from the last stage the game saved at, albeit with your score zeroed out. Power-ups appear after shooting a certain number of enemies, floating up the web towards you. Collecting these power-ups will reward you with one of a number of items: a better laser, bonus points, the ability to jump up off the web, a helper “A.I.” droid, a warp token and a smart bomb. If a power-up is collected during your exit from a level, you’ll hear the phrase “Yes! Yes! Yes!” and the first power-up you receive in the next stage will be the A.I. Droid which is just the sort of thing you need to try to get through some of the more difficult levels, such as the infamous level 64, which punctuates a reasonably well balanced difficult curve. The game is pretty frantic, and may leave you wondering what the hell is going on but perseverance is rewarded by a fantastic experience - both in the gaming sense but also in emotional and psychological senses. It really is a trip.

A version of T2K was released for other machines under the name of Tempest-X3 but featured a number of changes amongst was a change that saw your AI Droid all but labotomised. A second remake was created by Minter in the form of Tempest 3000 which was released for the Nuon - another machine that failed to makr an impact at retail. T3K remains one of the most beautiful looking games I’ve ever played, but suffered from the fact that it didn’t play quite as well as T2K.

These days you can play T2K using an emulator or go one better and pick up a copy of the game with the machine to play it on for next to nothing on eBay. You might want to set aside a good part of your weekend to play it, as time passes a lot faster when you’re in the zone.