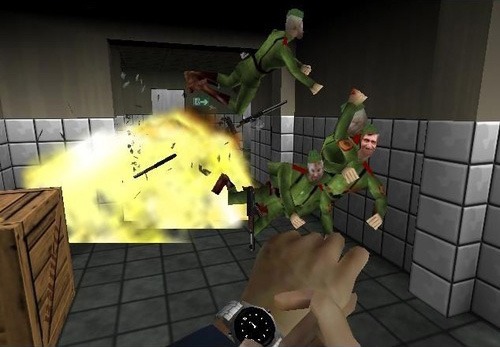 I’d love to see somebody calculate just how much time was wasted by University students playing GoldenEye: 007. Or, perhaps, how better off industry might be had we used that time to study rather than shoot each other in the face for hours on end.

GoldenEye is one of the most lauded games in history, being lavished with heaps of praise that might be considered ridiculous were the game not able to deliver on all counts. Best FPS, best multi-player game, best movie-licence - the list goes on. Being regarded as the best Nintendo 64 game ever is a commendation not many people would argue with. The game was released on the N64 which supported four players each with analog control for precise movement. The game took advantage of everything the N64 had to offer, serving up a split-screen multi-player experience with enough depth to allow for hours, days, weeks or even years of repeat play. It was a game that showed just how good Rare was at it’s peak - the story of it’s development is a fascinating insight into the whole process.

In 2008 rumours appeared online about a HD port of the original game for XBLA, but it never saw the light of day apparently due to financial disagreements between Microsoft and Nintendo. I’m not sure how that game would have been received, though. Whilst the original game still plays very well, especially in multi-player, it’s not without problems - control settings are not per player, levels are small in size, A.I. is limited and predictable, to name just a few. I feel that a port would have been looked at not through the rose-tinted glasses the original is regarded in but rather through the critical eye of today’s discerning gamer.

So, it’s no surprise why the game didn’t receive the sequel it so obviously deserved. Lots of people tried and failed to recreate the magical formula that defined the sublime experience of the original. What it was exactly that made GoldenEye so great became the stuff of legend. A few Bond games came along and were quickly forgotten about, most notable was the excellent 007 Nightfire - developed by Eurocom and released by Electronic Arts - which was a great game but failed to capture the attention of the press or public. Interesting then, that it’s the same development team that bring us the new GoldenEye: 007 for Wii, which is a remake but one that takes numerous story and gameplay cues from the much loved original and brings it bang up-to-date in terms of graphics, gameplay and production values. Fans of the original shouldn’t worry at all - the game is as worthy successor as we are ever likely to see and an essential purchase for those yearning to relive their multi-player student days. Perhaps it’s time to settle those old grudges online?