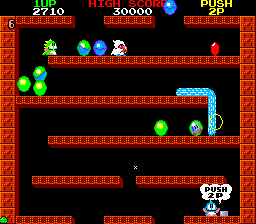 His and hers gaming at it’s finest.

Bubble Bobble is one of those old-school arcade games that stands up well today. It’s single screen platform mechanics haven’t aged one bit. Capturing monsters in bubbles and then popping them to collect fruit is a supremely addictive pursuit. Things are constantly kept fresh with power ups, expert level design and a variety of bad guys to learn how to deal with. It’s interesting that when playing with a friend the natural tendency is to play cooperatively to clear the screen in an effort to see just how far you can get, allowing for some great team building.

There have been a number of versions of the game released across most home formats but none have managed to capture the intricacies of the original game. This is a problem inherent in ports of any game - great care has to be taken to remain faithful to the original. If the developers responsible for the port do not have access to the original source code the quality of the resulting game will only be as good as their attention to detail and ability to figure out what is actually happening in the game behind the scenes. In the case of Bubble Bobble, this has resulted in levels that are laid out wrongly, bad guys that move incorrectly, power-ups that don’t work as expected and more. Some of the issues probably have more to do with the fact that the arcade runs in an odd screen resolution making a 1:1 conversion impossible. Also interesting is that, in 1996, Taito announced that they had lost the original source code to Bubble Bobble following a reorganisation. So when they were creating further ports and sequels they on had to work from program disassembly, playing the game and from other ports that had already been made. Whilst the arcade version is the blueprint, with the number of subsequent versions of the game it’s no longer obvious what exactly constitutes the core game. I do wonder why with the power of today’s machines an emulated version of the game hasn’t been released?

Bub and Bob - the dinosaur characters featured in the game - returned to human form for the game’s sequel Rainbow Islands and whilst it had some gameplay features in common with the original it was effectively a new concept. A more traditional sequel came somewhat later in the form of Bubble Symphony which stayed faithful to the gameplay of the original whilst added a few new elements. it also featured a rousing brass band version of the fantastic Bubble Bobble theme music. Other than using MAME to play the original under emulation, the WiiWare or PlayStation versions are probably the best home versions.