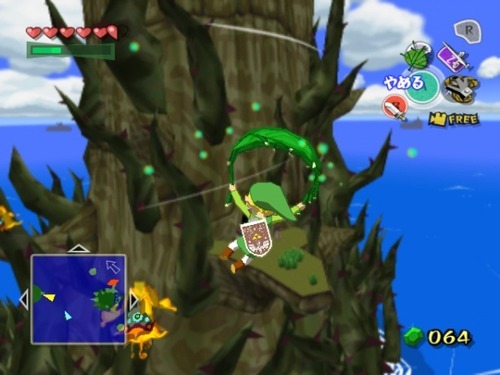 I’m not one for traditional adventure games - ones with a long, drawn-out main quest, lots of optional sub quests, experience points, levelling up, random battles and all of that sort of stuff. I need more direction in what to do next, although I still want to have fun figuring out how to do it and on the journey getting there.

My first Zelda experience was playing A Link to the Past on my SNES. It’s a great game and it has some clever touches throughout the story. But I can’t remember finishing it. That, in a nutshell, is my problem with The Legend of Zelda series - although it took a while for me to realise, mainly because of The Wind Waker. Whilst it’s your typical Zelda game, it looks so different to any of the previous games in the series with its cell-shaded graphical style that’s more akin to a Disney animation than a video game. The graphics alone meant I could put up with the annoyances the series had become bogged down with - the needless backtracking and relentless dungeon crawling. I know those things epitomise Zelda but The Wind Waker made me forget about them - for the better. It coated all that boring Zelda stuff in visuals to die for - visuals that would make many movie animators slack jawed. And that was enough to see me through to the final credits.

I’ve tried every Zelda since and they’ve not held my attention as much as The Wind Waker. Only as recently as The Twilight Princess, with it’s more grown-up look, I decided that I’m pretty much wasting my time trying to find a Zelda game that hits me quite as hard as The Wind Waker did. But there’s a special place in my heart for this story and I look forward to playing the game through again in 1080p High Definition when Nintendo give us capable hardware. I trust even more glorious visuals will once again help me see the final credits.