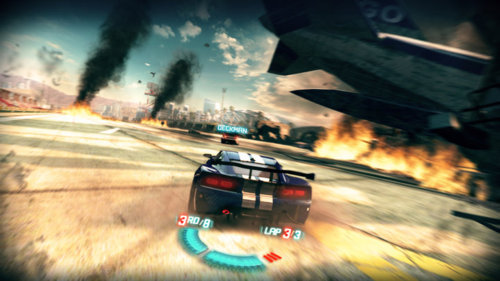 It’s common knowledge that video game movie tie-ins generally result in disappointing games. So it’s interesting to see a game that takes so much inspiration from the big screen and manages to wrap it up in a great game. And all without a movie licence in sight.

The look of Split/Second: Velocity will be instantly familiar to many. It will remind you of Jerry Bruckheimer action movies and super slick TV gameshows with it’s high gloss production values and all out assault on the senses.

A few minutes into the game you’ll probably wonder what the hell is going on. Your car is being throw all over the track, parts of the scenery exploding in astonishing fashion all around and all you get as a reward is a position near the bottom of the results when, or if, you cross the finishing line. But the game, with it’s completely over the top explosions, has drawn you in enough and you’ll keep playing. Just one more race.

A few hours later, you’ll have realised that whilst it’s a racing game at heart, there’s also a great deal of strategy involved. It’s very much a thinking man’s racer. You need to build up enough “juice” to be able to detonate parts of the scenery, which can be used to wreck fellow racers and change the balance of play and indeed in some cases the path of the course on which your driving. Your choice of cars will begin to grow, at a pace perfectly matched to the difficulty curve of the levels available.

A few days in, you’ll be progressing through the chapters, raced most of the courses and memorised where each of the powerplays are. You’ll have begun to form tactics or favourites ways to play certain sections allowing you to influence the race in many ways other than simply driving well. You’ll still be slack jawed at the variety of destruction on display and perhaps you’ll even have settled on a car that suits your driving style and allows you to go back and mop up a few of the gold medals you failed to get in the early chapters. The poker-like gamble of whether to spend time building up more juice for a large powerplay or use what you have on smaller explosions will sit in your mind long after you’ve switched off the game. Feeling in control is knowing you’ve got enough juice to make a change and knowing where you can make those changes.

A few weeks in and you’re skills will really be tested. You’ll be having some very close races whilst having to make judicious use of your powerplays. You’ll be approaching the end of the available chapters and wondering just how the explosions and set pieces can get any bigger or better. But they do. If you’re playing for achievements there are only a couple that cause any real problem - where you have to beat times set by members of the development team. The times are beatable, but it’s a task that really will separate the men from the boys - very difficult, perhaps even requiring fundamental changes to the way you’ve been driving the course involved, but always remaining fun.

Thinking about how a particular explosion and the chain of events that follow might be able to change the race is one thing, but the absolute joy that greets you when you manage to pull it off is another. Split/Second: Velocity is undoubtedly my Game of the Year 2010 and I’m looking forward to the inevitable sequel. Very nicely done indeed.