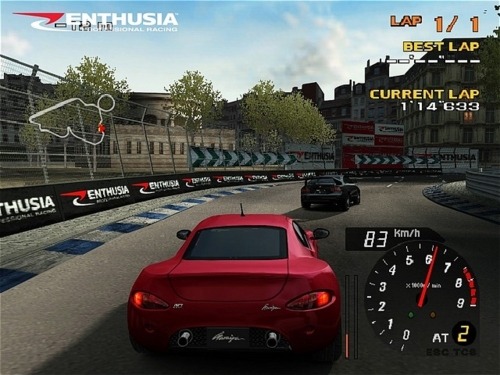 It’s brave to go up against an established franchise, but that’s just what Konami tried to do with Enthusia Professional Racing. In many ways it’s a better game than Gran Turismo but that wasn’t enough to take any substantial market share.

The first thing you’ll notice about the game is that it looks every bit as good as PS2 rival Gran Turismo 4, especially when your PS2 is connected using component cables. Courses and scenery are definitely set in more varied and interesting locales. But there’s no support for widescreen display, which is a slight annoyance especially when playig on modern equipment. Most noticeable is that the load times are very fast indeed, restarting a race is instantaneous as it should be in every game.

The game features a total of 211 cars and take a different approach to proceedings, in that you win cars rather than having to earn money to buy them. Plus, it has one of the strangest introductory movies I’ve ever seen - it includes CGI of fast cars, a dinky toy Morris Mini, a female photographer, a necklace and… an orgasm. So strange.

There are three main sections to the game. Driving Revolution gives you various driving scenarios and allows you test your driving skills and in return unlock cars for use in Free Race mode. Free Race mode allows you to race with your newly unlocked cars on any course, just for kicks. Finally we have Enthusia Life - you start off with a small number of cars in your garage, and are given a number of themed races to take part in, winning a random competing car as a prize, along with points and ranking. Quite RPG like, in some ways especially the random nature of winning a car after the race has ended. One tip - which sounds kind of obvious - is to make sure you pick a race where the odds are in your favour, with your car around the same skill level as the other competitors.

Not one for the feint hearted, you lose points for driving badly - crashing, colliding or going off road - pretty much opposite to the Kudos system seen in Metropolis Street Racer. This is probably the biggest issue with the game, as it can be a little bit too eager to deduct points especially when you also lose them in collisions that are caused by the AI.

These days I think most people would consider the game closer to the Forza series than the Gran Turismo series. However, I can see a lot of other games in there too: handling is very good with offroad sections feeling a lot like RalliSport Challenge 2, scenery is full of character a lot like another of Konami’s games GTi Club or even Metropolis Street Racer, and the attention required whilst driving is very reminiscent of Vanishing Point. So, elements of a handful of my favourite ever racers, which can be no bad thing.

I’d love to see a sequel to Enthusia, but I doubt Konami would ever consider it. They made an admirable effort but the game just didn’t excite the punter in any lasting way. Shame. Look out for a future review of Konami’s Kaidō Battle game for their take on another style of driving game.