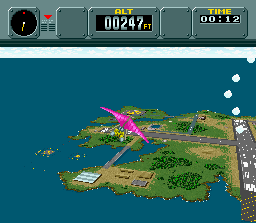 Take to the skies in one of the most relaxing video games of all time.

Pilotwings is best described as an arcade flight simulator. The game enrolls you in a flying school and gives you a series of missions of increasing difficulty using a variety of aircraft from hang glider and airplane to rocket pack. Gaining enough points in each set of missions allows you to qualify for a flying licence and rewards you with a password that can be used to resume from that level on subsequent play-throughs. The game makes use of SNES graphics Mode 7, allowing a flat image to be transformed and skewed to give the illusion of 3D. These days the look might seem a little primitive, but back in 1992 this was awe inspiring stuff.

Like many classics it was easy to pick up yet difficult to master, but rewarded extended play by giving the player secret characters or missions if they were skillful enough to land their aircraft on moving platforms. You could fly a bird man across a series of trampolines, or take control of a penguin jumping from a sky high diving board - all for a handful of bonus points. It turned the serious simulation on it’s head and infused it with a great sense of humour.

The subtle jazz-pop music and idyllic island locations lent themselves to flying without a purpose. It was so much fun to take to the skies and just fly around. So much so that my Dad used to ask me to put on one of the hang gliding levels and he’d fly around catching thermals and just enjoying the view. When his time was about to run out he’d restart the level and do it all over again. It says a lot that the game was that much fun without actually competing any of the objectives.

The game saw a sequel in Pilotwings 64 on the Nintendo 64, courtesy of Nintendo and Paradigm Simulation. This version of the game added fully 3D environments and more realistic vehicle behaviour. As much as I hate to say it, this version has not dated anywhere near as well as the SNES original. It feels very clunky and slow and I really don’t enjoy playing it these days.

So it was great to find out that, after 15 years of waiting, an all-new Pilotwings game - Pilotwings Resort - was to be a launch title for the Nintendo 3DS. I’ve played the game extensively and it’s just sublime - every bit the sequel I’d wished for. Whilst it’s not without faults - there’s only one location, a handful of vehicles, less variety of landing areas and no funny bonus modes. But it is in 3D, has it’s fair share of novel rewards and bags of gameplay. It’s also a far more accessible game than either of the two previous games. It’s evident that the Nintendo of today can put out games of a higher quality than they have ever done before. Even if it takes them a while to get around to it.