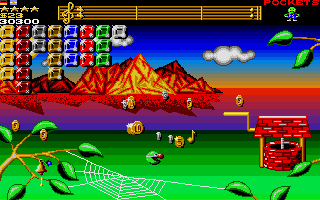 The greatest video game ever sold?

Wizkid was born in a time when British video game developers ruled the world. That such a time existed may seem strange today, as developers from Japan and the USA roll out one blockbuster game after another whilst British development companies quietly wonder where it all went wrong. Back in the early 90s a video game could be made by a small team of individuals rather than a team of hundreds - it was a much simpler time. To put things into perspective, at the time Wizkid was released the home computer scene was in decline and video game consoles such as the Super Nintendo Entertainment System and Sega Mega Drive were invading UK homes.

A product of bedroom-based development house Sensible Software during the peak of their creative output, Wizkid was an ode to everything British. It was Monty Python, seaside arcades, Fawlty Towers, tabloid newspapers, The Young Ones, punk rock, Viz and so much more – all wrapped up in a game that can only be described as, well, completely bonkers. It was fun, but perhaps more importantly it was funny. My initial play session left me bewildered, but as I settled into the weirdness it dawned on me that I was witnessing the most wonderful game I’d ever seen.

At this point in time Sensible Software were a household name, an established company and burgeoning brand who were coming off the back of a string of considerable successes. Most recently they had scored a hit with Mega-lo-Mania and were deep into the development of Sensible Soccer, the game that would turn out to be their magnum opus. Wizkid may seem like an unlikely stop gap, not helped by the fact there are only a tenuous link to Wizball - the older game by the company mentioned in the subtitle. You’d be right to wonder how such a crazy concept was sold to the executives at Ocean, but back then it was quite common for a publisher to sign a developer on the strength of their previous games with nothing but blind faith - or perhaps just trust - in their capability to deliver. A lot like the music industry works - the record company or publisher sign an artist to make an album before they ever hear it. Jon Hare – one half of the original Sensible Software team – has described Wizkid as a game that shows the height of the team’s collective expression and imagination, a game that was undiluted by the publisher and showed just how much they were capable of achieving. The result is a game so quirky it feels almost Japanese in its execution.

Right from the off you’re in no doubt that the game is a little bit left of centre, as you witness Wizkid conduct a pair of cannon to an excerpt from Tchaikovsky’s “1812 Overture”. You can’t help but raise a smile - perhaps as a reaction to the confusion that’s slowly setting in, or maybe just because the act of conduction a pair of cannon looks so damned fun - in much the same way as the parade scene in Ferris Bueller’s Day Off. The game combines two decidedly old-school concepts: block-breaking and the adventure game. You play an odd variation of Breakout, where instead of a paddle you control a disembodied head whose job is to dislodge blocks so they collide with enemies. Success results in the appearance of a musical note, of which there’s a whole tune’s worth to collect. Once you complete the melody the game switches into adventure mode, where you gain control of the fully formed Wizkid and can walk him around a series of platform-based adventure screens, collecting items and solving a series of obtuse puzzles. Between these two forms of gameplay, you’ll collect a bunch of cats, solve some crosswords, buy some useful and not-so-useful items from a shop, row a boat, ride a donkey and much more besides. If ever there was a case where a game was more than the sum of its parts this is it. The game is unforgiving at times and if you’re not careful you’ll do well enough get to the end, but not well enough to see the “real” ending. You’re unlikely to see everything the game has to offer in your first play-through so there’s a chance to discover more in subsequent replays. If you’re not going to be able to play it, make sure you at least watch the play-through videos linked below.

Could a game like Wizkid be successful today? It’s hard to say, but it would have its work cut out. The types of games it’s comprised of have long since fallen out of favour. Publishers don’t take risks any more, preferring to instead push out identikit games that cater the latest trend. On the other hand, there does still seem to be occasional room for off-the-wall presentation and humour in a game, as shown by the likes of Peggle and Tomba! - a combination of which would be a pretty good match to the madness of the world of Wizkid.

Whilst it’s not my favourite game, or even anywhere near what you might consider to be a perfect game, the sheer scope and ambition seen in Wizkid means it’s my choice as the greatest game ever sold.

(That’s not to say it’s the end of this blog, though!)